Back To Build-To-Rent In The News

SINGLE-FAMILY BUILD FOR RENT: BEHIND THE HYPE OF HOUSING'S HOTTEST LATE-INNINGS TREND August 22, 2019

For the six-plus years Mark Wolf has worked to build AHV Communities into a sustainable going concern, he's eaten, slept, and breathed the fact that America requires development of somewhere between 384 and 1,369 new rental units a day for the next decade, just to keep pace with population, household, and economic growth trends.

For Wolf, the question has never been one about fundamental demand. Nor has he doubted for an instant the size of the opportunity that would come to a business modeled and able to execute to meet it. That July 2019 may have been a record-breaker for heat, the torrid weather's hardly a match right now to the sizzle and pop single-family build-for-rent of residential real estate's hottest trend among  investors, developers, and builders. One in 20 new homes comes into being expressly for the purpose of rental living--almost double the historical share of new homes built for rent.

There are two reasons that number and the share of new residential construction it represents are likely to increase, although not necessarily in leaps and bounds.

The phenomenon itself is no surprise to AHV's founder and CEO Mark Wolf. What may make him a tad skeptical, however, is the late rush of enthusiasm among single-family for-sale builders--most of whose capital comes with expectations of nearer-term payouts versus long-haul returns.

"They're doing different kinds of things in the single-family rental space than we are," says Wolf. "That's not to say that we're right and they're wrong, but our whole business model approach and our value proposition and the way we design our homes, amenities, and neighborhood for our renters is strategically different."

For Wolf, customers are renters. For for-sale builders, customers may be renters--for now--and the question may be whether it remains a good business and operations model whether they want to remain renters or not.

Builders--among them D.R. Horton, LGI, Lennar, and more recently, Toll Brothers and Taylor Morrison--have redoubled strategic and investment commitments to build-for-rent offerings as they diversify operations for both resilience and opportunity in housing's late-stage recovery.

This will, no doubt, be the hot topic of corridor talk and at the upcoming FuturePlaceconference in Miami, Oct. 21-22, bringing together strategic leaders of the residential masterplanned development and home building business space. You can register for FuturePlace by clicking here now.

Setting aside the din of all the buzz for a moment, let's look at what's driving the trend, map out the question of what builders need to know about what's happening, and take some conclusions away on why it matters.

At its root, even at just 5% of total new single-family home construction, the trend is a people trend, not--as is widely assumed--a capital investment, a real estate asset, or a construction operational model trend.

Fundamental demand for single-family for-rent taps two robust--and growing--well-springs of household economics these days, one being the rent-by-necessity group of mostly younger families for whom down payment hurdles, monthly payment challenges, interest rate pressures, and rising for-sale prices have put homeownership beyond their means, at least temporarily.

The other group, whose magnitude and clout are on an upward trajectory, are households who could afford to buy, but choose to rent--opting for the flexibility, the simplicity, the relatively bother-free, "less strings-attached" lifestyle that not owning lends--and, yet, want to do so in a detached, single-family house in a new residential community.

In other words, while all the buzz right now is about capital investment, land, and operational models aligning to delve into the market, the important matter is that consumers are pulling that alignment into play rather than the other way around. What's more, it's both consumers caught in housing's affordability and supply-constrained vortex and ones in households who simply choose rental living. They may serve as a stepping stone into or out of homeownership, or, just as likely these days, they might be the first and only choice of a place for a household--young, family-with-children, or nearing- or after-retirement.

The point here is that demand for this housing type--a horizontal multifamily neighborhood living--reflects the past, present, and an ever-larger future of residential development because it's what people today either want as their preferred housing type, or want as their weigh-station to homeownership. As we've noted:

According to National Multifamily Housing Council data, 15 million households, representing 35% of renting households, rent single-family homes rather than multi-unit apartments. Also, one of every four renters of properties newer than 1990 earn household incomes of $75,000 or more.

Two market experts from BUILDER sibling company Meyers Research--senior managing principal, Tim Sullivan, and managing director, Steve LaTerra--talked recently about single-family-rental, its emergence as a powerful new trend, and its potential in a blog post, and they focused particularly on how the opportunity ties so closely to customers and to the land calculus that goes into giving those customers value. Here's an excerpt from their conversation:

The SFR business isn't just to build it, sell, it, and move on. There's a longer-term commitment. Many of our home building clients are paying attention to this space. Can all homebuilders compete effectively here?
Yes and no. SFR communities built on platted lots are more similar to homes built-for-sale than detached apartments, but both rental types of communities are operating businesses rather than self-liquidating assets. If a builder isn’t prepared to run the operations, they probably shouldn’t build homes for rent as a business.

Agree. What about master planned community developers?
Most master planned community developers in Phoenix have begun considering SFR as a replacement for entry-level given elevated land costs. The thesis is that once a tenant establishes himself/herself in a geography (shopping area, school district, etc.), they are far more likely to remain in the area and buy a home when they are ready. This has played out in Phoenix with early movers such as BB Living, NexMetro, and Christopher Todd.

What are the most important factors to consider when analyzing a ground-up SFR community?
First, land cost. It’s the greatest lever in the calculus of a proforma. Rents vary less across submarkets than land costs. Next, job growth, incomes, housing stock, and competition. Even though SFR communities can command rent premiums of 25% over traditional garden style apartments, the product shouldn’t be constructed everywhere.

Land really is the key. With that in mind, do you think that SFR communities are viable in most geographies?
No, we have not seen the concept underwrite in the high-priced coastal markets as a general rule. Even within markets that have accepted the concept like Phoenix, Denver, and Dallas, our research shows that the product doesn’t work in every submarket.

Our research indicates this product is a permanent part of the suburban fabric. What are the key factors to support this?
There are a few reasons why SFR are here to stay. First, the market has embraced them as a desirable housing product and the old stigma of renting has waned. Second, housing affordability concerns are not easing. Third, the increasing cost of homeownership is keeping renters renting longer and occupancy levels for SFR communities are high. 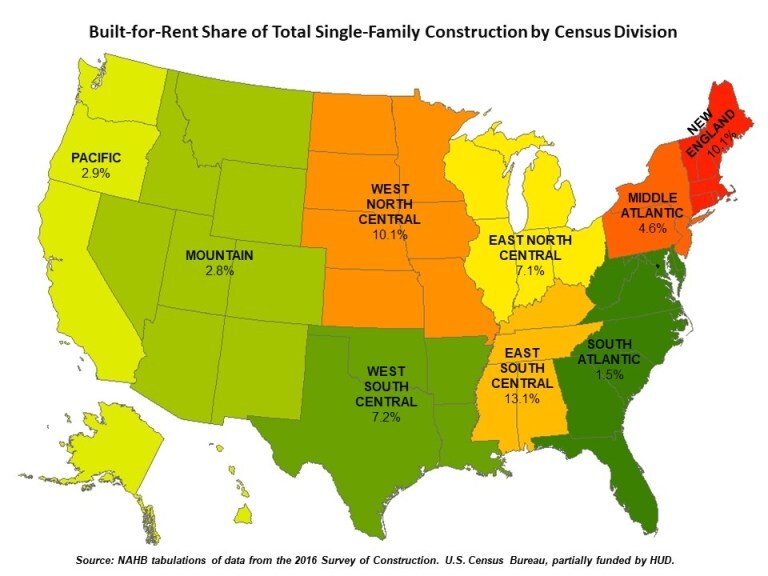 Rob and I talked about the data and the take-aways this week, and he took pains to emphasize that while single-family built-for-rent is a growing slice of residential construction's pie, it is and will remain a small slice.

Insofar as this housing and community type has most likely gained extra traction in light of affordability and supply-constraint challenges, Dietz looks at the category as "one of many necessary approaches" to the new construction crunch and the attainability crisis that has accompanied it.

Here are a few take-aways for builders as they explore whether to jump into the single-family built-for-rent fray:

Mark Wolf and his team at AHV Communities are in this business for what it is--an option for people who want higher-end rental living but want it in the form of two-story homes, with backyards, front-yards, side-yards, amenities, and a no-fuss lifestyle.

If you don't have that kind of fanatical focus on giving a customer that kind of experience, the single-family built-for-rent business is not the business for you, no matter how hot a trend it looks to be.